Already scientifically proven that several caves in the southern Maya Lowlands have yielded bits of gemstones, both modified and unmodified, which lend credence to the theory that these stones were used in some ancient ceremony. The archaeological literature implies that gemstones exist occasionally.  sources imply that gemstones were believed to be valuable stones.

A survey of this material reveals that gemstones appear with some regularity. According to ethnographic literature, gemstones used in rituals, such as cure and divination, were reserved only for trained ritual professionals. This article suggests that the situation was analogous prehistorically based on similar ethno-historical accounts. It may allow archaeologists to use gemstone artifacts to track ritual specialists' activities. The analogy was made possible because the situation was analogous prehistorically.

It was allegedly thought that the power of gemstones was drawn from the power of the ground. As a result, gemstones discovered in caves, which are likewise related to the earth, would have been regarded to be particularly strong. Caves have been cited as a possible source of these "power" artifacts by several different pieces of evidence.

As written in the article "Ancient Maya tooth sealant glued gemstones in place—and may have prevented tooth decay: 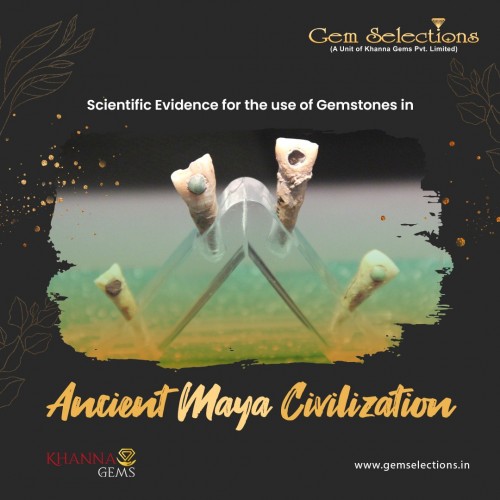 "The ancient Maya believed that one might establish a link to the divine via controlling one's breathing. Many people have changed their teeth to clean their mouths by filing, notching, and polishing them; some have even ornamented their teeth with diamonds. This is done to improve their oral hygiene. A recent study suggests that the glue used to put these diamonds in place may have had medicinal properties, which would have helped defend against infections if they had happened. This would have been beneficial if they had occurred.". To know the full detail of this article only by reading it carefully.