According to the Hindu scriptures, the Yellow Sapphire is one of the nine jewels known as the Navratnas. It is regarded as one of the best and most advantageous stones of all Navratnas. The 'Pukhraj' stone, also known as the Push Raja (Sanskrit) stone and the Peetmani stone, is considered to have a highly significant position in astrology. It is thought that the Pukhraj Stone has the abilities that belong to the planet Jupiter. Because Jupiter is the planet with the most mass in the solar system, the Yellow Sapphire (Pukhraj) has unique properties compared to other valuable stones.

The Meaning Behind the Yellow Sapphire

This gemstone brings out the best in its user and those around them, thanks to its dazzling appearance. Before wearing one of these types of gemstones, a person must first have their Janam Kundli analyzed by a knowledgeable astrologer, even though they are a kind that works well for everyone. In a person's Kundli, the implications of wearing this stone might bring about unfavorable outcomes rather than favorable outcomes if Jupiter is located in the incorrect house.

The planet Jupiter is considered the master of knowledge, good health, and financial success. Because of this, the Yellow Sapphire may operate as a beacon, luring and strengthening many aspects of a person's life as desired. Although it is most often suggested for those born under Sagittarius and Pisces, this stone is suitable for anyone born under any zodiac experiencing difficulties.

Who can wear a yellow sapphire?

The user will experience the advantages of the Yellow Sapphire more quickly if their ascendant is in either Sagittarius or Pisces. In addition to Pisces and Sagittarius, the Yellow Sapphire is said to bestow good fortune and advantages onto all other signs as well. Cancer ascendants get a shower of protection and grace from it, while Aries ascendants see an increase in well-being, affluence, and fertility. 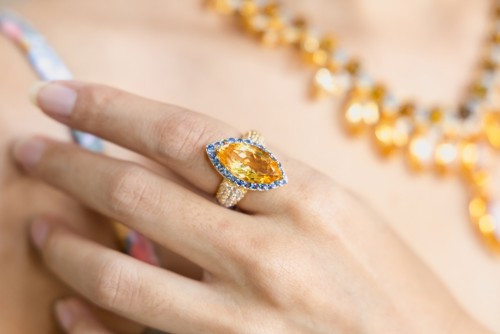 Importance of Yellow Sapphire as a Gemstone

When worn appropriately, the Yellow Sapphire, a very powerful gemstone, may have a wide variety of beneficial benefits on both the body and the mind of the person who wears it. The myriad of practical advantages that it bestows makes it a gemstone that is cherished by people all around the world. The Yellow Sapphire has several advantages, including the following:

·       Anger Management is Improved When One Fights Against Evil.

·       Contributes to the Achievement of Academic Success

Yellow Sapphires, to get all of the advantages that come from wearing them, must never be handled. The gemstone will not be powerful enough to deliver the desired effects if this is not done. The Pukhraj stone may have the following unintended consequences for those people whose houses are not in harmony with Jupiter's placement: