How fascinating it is, that there are beautiful gemstones that represent our birth month. These gemstones are not only mere stones but hold mystical properties and dumbfounding history. It's interesting to learn about the impeccable gemstones that are radiance personified.

Two such gemstones are diamond and zircon. They are the birthstone of April. The month of April represents spring, shine, vitality, freshness and warmth. The two gemstones that dictate this month have immense radiance and gleam that add to the beauty of April. These two gemstones are not only the most lustrous but are also the best substitutes for each other. With further ado, let's delve into the shining world of these gemstones and scrutinize them thoroughly. 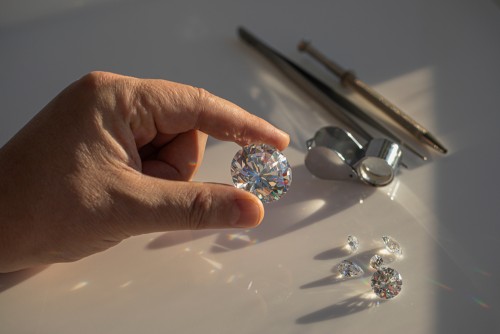 The vivid colour flashes of white zircon make it popular and precious. It has a brilliance and fire that rivals diamond because of its high dispersion and refractive index. It also has the appearance of a diamond and is frequently mistaken for one. Due to their similar names and look, natural zircon is frequently confused with man-made Cubic Zirconia. The two stones, however, are vastly different. Zircon is a naturally occurring gemstone, but Cubic Zirconia (CZ) is a man-made mineral that is generated in a laboratory and so has no negative energy. The wearer of white zircon is blessed with good fortune and money. It bestows wisdom on the user and aids in the development of clear thinking. It boosts the wearer's self-esteem and boosts their self-confidence. It also assists the wearer in maintaining an opulent lifestyle and social position by increasing income sources and opening doors to new chances. In the lives of couples, white zircon bestows marital joy. It aids in the development of love, intimacy, harmony, and mutual understanding between them. It is also supposed to aid in the revitalization of reproductive health in couples who are having difficulty conceiving. White Zircon stones also have excellent therapeutic and curative powers. It aids in the treatment of ailments such as fever, epilepsy, gastrointestinal problems, diabetes, migraines, and hormonal imbalances. It also has a favourable effect on the body's appearance.